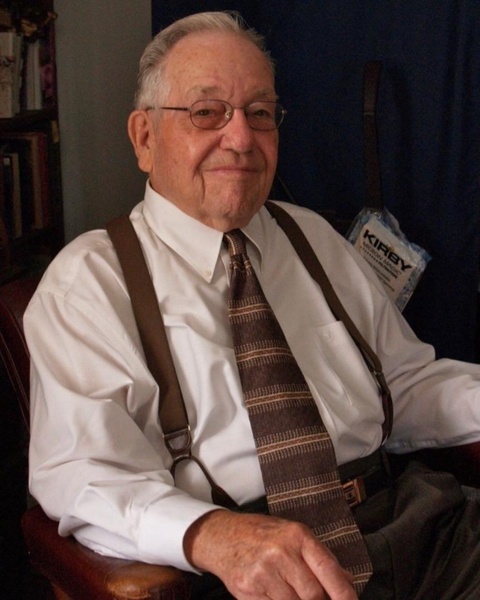 James Herman Vandiver, Jr., of Murrayville, GA, and of Wheaton, IL since 2018, transitioned from Earth to Heaven September 21, 2022. He was the oldest living child of James H. Sr. and Lessie Hefner Vandiver. He was proceeded in death by his wife, Sue Anderson Vandiver. His children are Dianne Vandiver Wallace (Bill) of Cherryville, NC, and Jack H. Vandiver, III (Robin) of Wheaton, IL.
Known as “Jay, Daddy Jay, or Papa Jay” to many, he was born in Gainesville, GA, January 28, 1923.  Raised in the mountains of North Georgia, Jay was the second of 7 children, two of whom are still surviving.  He met his wife Sue at a skating rink and the relationship grew quickly into love.  Married July 18, 1942, Jay and Sue celebrated 75 years together.

Jay was drafted to serve his beloved United States in WWII. As an Army Private, he was placed in the 42nd Rainbow Division, landing in the second wave of invasion on the Beaches of Normandy, France. As a Sergeant, he was commandeered to travel with a detail for a higher-ranking officer behind enemy lines. Over the years, he recounted numerous stories to those who asked, one of which was his greatest achievement, liberating the prisoners at Dachau Concentration Camp in Germany.

As a man who loved God, Jay’s faith matched his humility. His love for his family was evident to everyone, and he unofficially adopted many! He always felt called to serve others.  Though he worked long hours and retired as a diesel mechanic, he always found time to serve his church in whatever capacity was needed. Trying to keep an old school bus running with heat on a Sunday morning was a challenge as he picked up families for church. He served on the District Board of the Wesleyan Church and was Sunday School Superintendent for many years. As a member of Gideons International, Jay distributed Bibles to college students, the incarcerated, hospitals, and schools. During his 4 years in Wheaton, IL, many came to visit for the blessing of having him pray over them.

The family will receive friends at W.R. Strickland & Sons Funeral Home in Clermont, GA, on Thursday, September 29, from 5 p.m. to 8 p.m., and the funeral will be Friday, September 30, at 1 pm in the Strickland Funeral Home Chapel. Reverend Ken Anderson and Reverend Tem Frierson will officiate the service.  As an honored WWII veteran, Jay will be escorted to the funeral home for his life celebration with family and friends. We would appreciate your prayers as we remember his life and impact.

In Lieu of flowers, please consider a donation to The Gideons International association.

To order memorial trees or send flowers to the family in memory of Jack H. Vandiver, Jr., please visit our flower store.